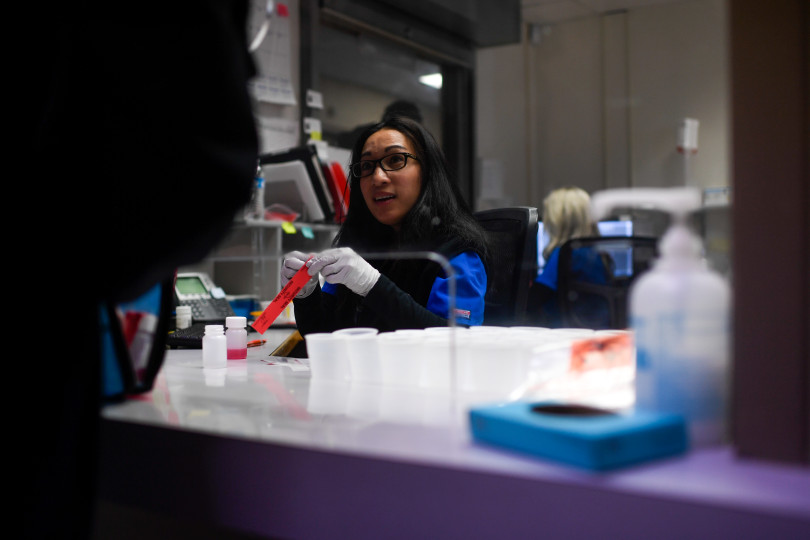 Methadone clinics in Colorado have doubled in three years, but the state is still short on treatment

They arrive before the sun, lining up for a lifeline that comes in a shot of pink liquid.

The doors to the methadone clinic on the campus of Denver Health open before dawn, and the line stretches down one side of the clinic hallway and back up the other. One at a time, patients swig a cup of methadone passed through an opening from the other side of a protective window.

The liquid opioid quenches the craving to shoot heroin and staves off a withdrawal that brings on vomiting, sweating, muscle aches and uncontrollable shaking in what some describe as the worst flu ever.

Denver Health’s narcotic treatment program now has 550 patients, double what it had three years ago. But the medical center estimates it could serve four times as many people, more than 3,000, if it had the staff and other resources to take everyone addicted to opioids who walked in from the streets, visited the main hospital or was booked in the Denver jail.

It’s a similar story across Colorado, where access to medication-assisted treatment for opioid addiction has expanded rapidly in the past few years but isn’t yet close to getting a grip on the need. Throughout the country, the epidemic has overwhelmed resources.

In the past three years, the number of methadone clinics in Colorado has doubled — from 11 to 23, in sync with a 2014 rule change that Medicaid would start reimbursing for methadone treatment. Most are in the Denver area, but there are now two in Pueblo and one each in the San Luis Valley, Colorado Springs, Greeley, Grand Junction, Montrose and Durango. New admissions to “opioid treatment programs” — the only places allowed under federal law to dispense methadone — have gone from 1,388 people statewide in 2013 to 3,566 last fiscal year.